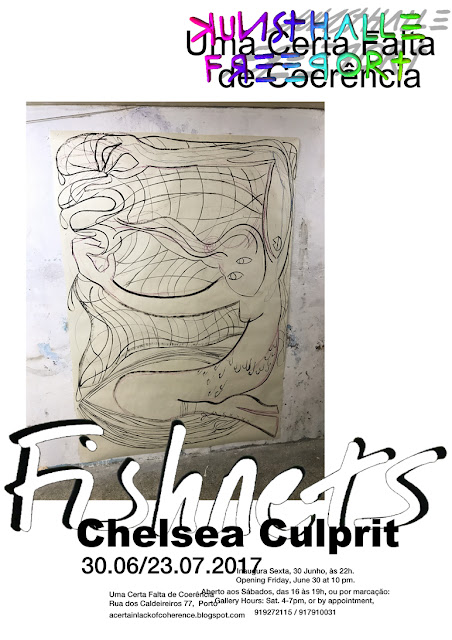 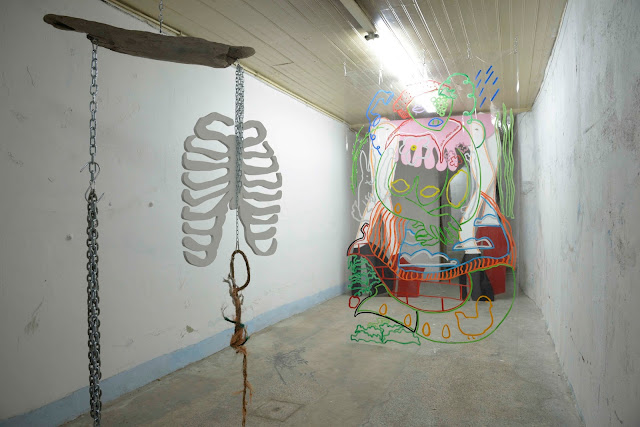 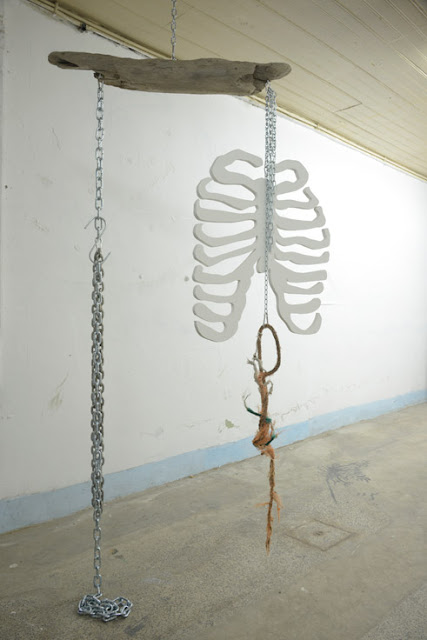 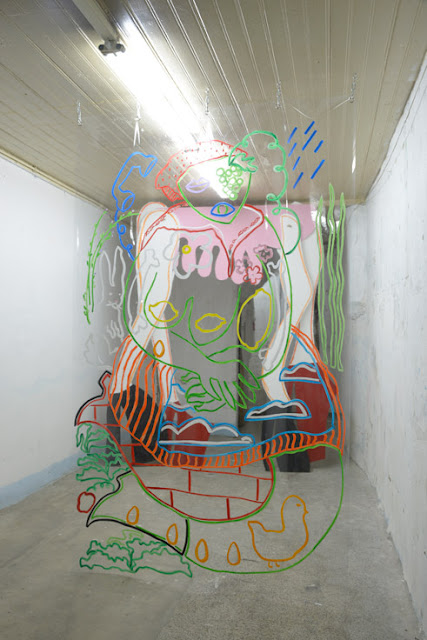 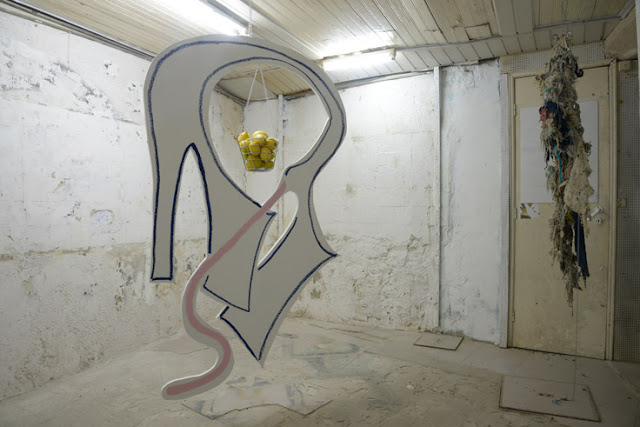 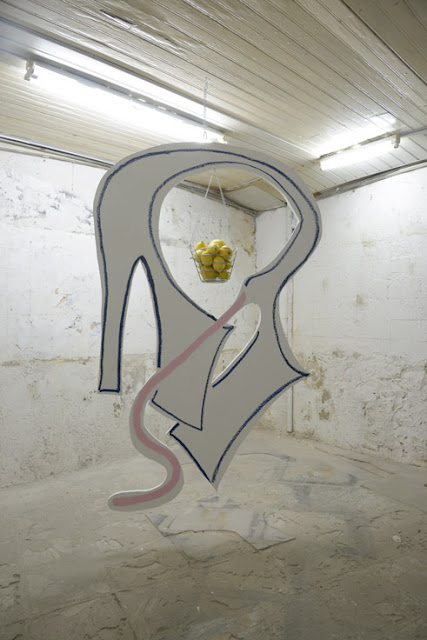 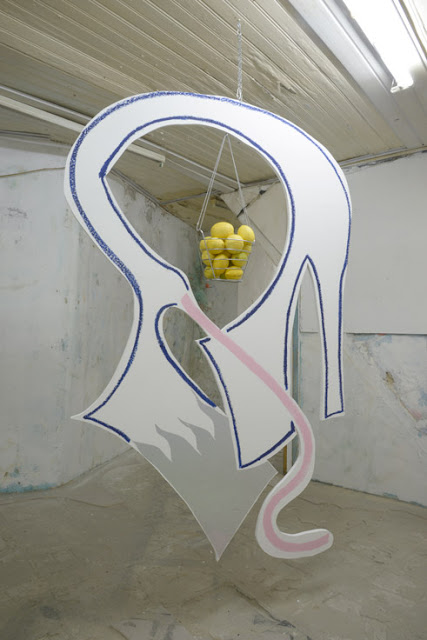 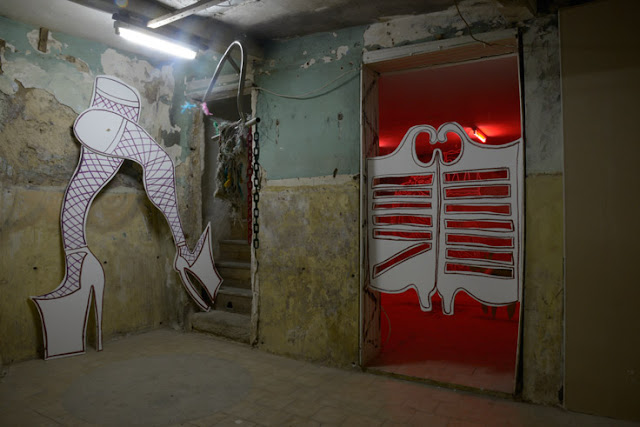 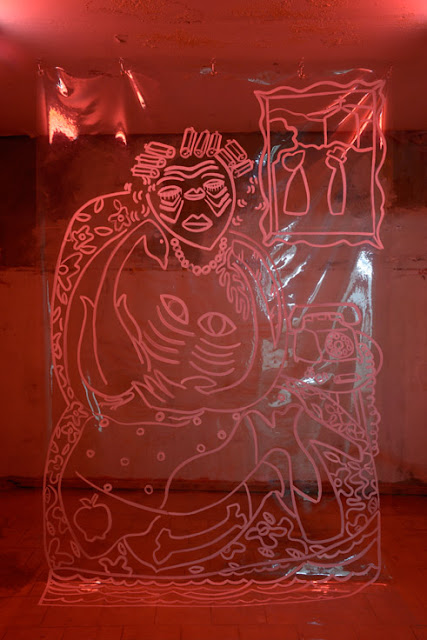 This looks like your old place. I was there with you. It feels like even longer ago, maybe when I [still] crawled on my belly like a snake, so low as to almost fall below the line of the observable, down into an underneath from whence this [old] place rises. I can make out that you have returned. It’s what paintings may do: demonstratively dress this place in your projections so that your memories make trouble for the delusion of reality. “…[T]he land of the most ancient passions, it is a land without landscape, without monuments. But not without form and without inhabitants…And to get inside the Interior Bible? One must take the stairs and plunge into the flesh. Down to the farthest memory.”[1] I can see through everything. You see through everything.

[The] construction (it is particular, objectivity belying subjectivity, and even the latter designed by men to exert control on every level [of the building]) is built from the lowest argument repeated, brick-like, across years of time. That argument that you spit out word by word at him (all of our hims). Your voices buckle under the pressure of touching this conflict’s earlier iterations. The breach and a certain solidity of form are mutually reinforced for as long as you are willing to remain in the repetition of those words. When your trust in the exchange withdrew, the sign withdrew.

I want you to take me somewhere that isn’t predicated upon your and my compliance. Is there a word like ‘reminder’ that works with feelings instead of mental trappings? Refeelingser? Refilled.

Proceed through a window that has been shattered following upon an ochre yellow pump I wore when I pretended to be Lynda Carter and kicked an invisible assailant. The high heel flew off of me and out the room through the window, followed by a lie about how the pane came to be broken.

Proceed through the back room of a nightclub. That is, gasp and fill your cheeks with air, and hold it there rather than a gulp down into your belly. Taste terroir. Breathe fire. Keep these elementals at your mouth like lip gloss or skipping meals or shots of whiskey handed to you by a drag queen with a second set of eyebrows drawn on without her first pair glued down. Gorgons roam in rhinestoned tights. Long legs and paydays drenched in pearls.[2] Drenched in shadow play, my sisters Michael, Alice, Betty, Chelsea, Nelda, Bobbie. “Thick / Squirt — / Swellteet / Earthcow – / Morns / Wing / Blood – / Dead / Sisters / Brilliant / Nude / Seduces / Top / Sea.”[3]

The tide comes in high. I dream of what was taken in the flood. This wetness can, at most, be described categorically—any deeper and language fails [is designed to fail]. What do you make out when Prospero professes to govern over the storm and Poseidon claims the waves? Overextended, this is an ancient irony born from the inclusion into his system of order an articulated border along a realm of unthinkability in which to refuse representation of otherness—hers, mine, even that in him which drops below his own attention. What he (all the hes) mistook for a reservoir has gradually been revealed as endless, expansive depth, with his only instrument by which to encounter it being his small word ‘water.’ And only latently do they desire to extend control over this non-place, a pool made to be beyond the last word.

Have you tried to speak underwater? I don’t realize until it’s (too?) late that my attempted speech dissolves my defenses. In the dream he recognizes me, opal horror. “I will never finish fashioning the graven image for myself.”[4] Etyomologically, grotesque is ‘from the grotto.’ I am not the thing carried away in the flow. I am part of the flow, an undercurrent beneath the pettiness of assigned positionalities, conclusions, facile self-authored harbors.

“Then I looked at the water. Still sea. Dark green-blue blood sedimentation, progressively subsiding, colour, immersed in colour the water reflected the colour of the sky, moment after moment this blue the body-psyche yearns to enter. A yearning to enter the water engulfed me, a desire to enter water up to the horizon. And I looked at the sky to escape the water… And the air remains, the water stays still. Water still. Sea still.”[5]

You understand that the/ir most rigorous analysis plays in the shallow end. We, however, dive and dredge.

I remember being in the home of two elderly sisters whose mother had been an invalid, and they never married. (Instead?) they collected porcelain dolls depicting girls at ages from infancy to young adulthood. These figurines crowded around the furniture, fireplace, along nightstands. I still see one tableau vividly of a virginal young woman seated in a rocking chair beside a prized VHS copy of Elvis Presley’s 1957 film Jailhouse Rock. In the years I’ve known these women, the materials of their lives have overtaken their silent girls; tall stacks of paperwork, bins of archive materials from their Southern Baptist church, and mostly unnamable residue has flooded the rooms of their small house. Desire was the first to go under in the swamp, followed upon by the fragilities signaled by collectible children. In the eventual excavation, a pile of home order catalogs will be displaced and shining glass eyes will peer out from below.

When language undoes itself as water-soluble hubris, maybe I can raise my hands in surrender, given over to what lies just out of reach from writing. More difficult is being in this text now, negotiating where groundwater disrupts. Notice what escapes the net. Notice what sinks into the swamp. Water was included in the elements so there would be somewhere to dump bodies. When I wonder who witnesses this purge—the cruel designs of an outside-of-language as a site of deposit for the excessively, decisively unremarkable—I see Grandmother Willow planted there, in a Disney cartoon, as an ancestral feminine deity at the water’s edge, a troubling spot of landscaping right at the threshold of Cixous’ “land without landscape.” Her depiction is a perfunctory ‘old wives’ tale,’ performed so as to preclude the possibility of a corresponding figure in operation outside of the narrative (please tell me the difference is apparent?). I feel happy for the subtle failure of the form to package a patriarchy-approved womanhood; as a child I would wander in a forest behind my house and bellow Grandmother Willow’s song. Grey tendrils of Spanish moss would sway overhead. “Herbstained — flowerstained — / shellscented — seafaring — / foresthunting — junglewise — / desert gazing — / rises heart from chest — / lashing with beauty — / afleet —”[6]

Behind the sisters’ house with the dolls and behind the cartoon talking tree presides a memory of my grandmother. A part of me was frightened of her when I was young. As she was dying, she moaned in her sleep. I held her hand. It was contorted with pain and arthritis. She grew blueberries and pecans (I know here it is grapes and lemons). Her ovaries filled with cancer. Her lungs filled with water. She would forget herself.

This is why we must be witches.[7]

“I was in the middle of discussing the mysteries of sexual difference. An interlocutor was asking me questions about women’s sex… Suddenly a wave rose up from the depths. A vast green wave that not only reached our high height but continued, overtook us, rose green and limitless, rose up to the platform and beyond… Deluge is our condition, but it is not our end, while it pours off our plumage, inside the dream lights a candle.”[8]